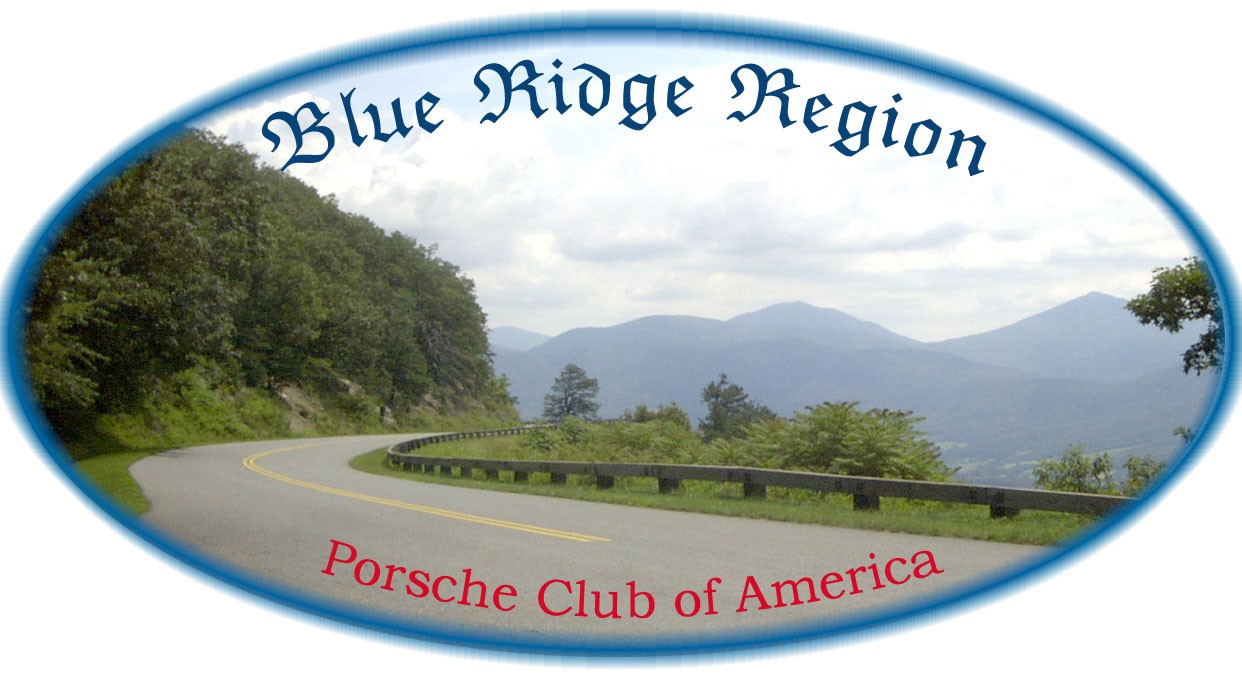 The image now used as Blue Ridge Region’s logo on our window decals, name tags, hats and sew-on patches are from a photo taken by Dave Hogan at the Harveys Knob Overlook (milepost 95.5) on the Blue Ridge Parkway.

The original logo was the creation of Claudia Snow, Dave Snow’s wife, who passed some years ago.

Several years ago, the Club received a cease-and-desist letter from attorneys for the Blue Ridge Parkway claiming our old logo infringed on their registered images.  There were similarities to both circular images with a roadway curving to the right and a single pine tree on the right side.

We decided it wasn’t a fight we were going to win so a new image was sought for our club.

The following is from past Blau Rain issues:

Nov. 1983 – Two logo drawings were submitted to the board.

May 2008 – Board notified of letter from National Park Service about trademark infringement, old logo dropped.

Aug. 2008 – Two logo designs submitted to the board and the current logo was approved.

Dave selected a view looking east towards the Peaks of Otter.  In the foreground you see the roadway make a sweeping right turn downward towards the Pine Tree pullout, the knob frames the left side of the view and moving to the right are Flat Top Mountain, Sharp Top Mountain and with a tree framing the right side.

After seeing the larger image of our logo used as a background during a Zoom call, I was pretty sure I recognized the location.  I forwarded the image to someone familiar with this location and he readily confirmed the location was Harveys Knob.  Volunteers conduct a count of migrating raptors at this location from late August until December.  In 2020 volunteers witnessed a total of 8,093 migrating raptors representing 14 different species, (includes 5,970 Broad-winged Hawks and a record 239 Bald Eagles for this location).  The site was manned for 583 hours in 2020, (my friend estimated he was there for ~ 160 hours, and I did about 120 hours).   Some of the observers also perform unofficial counts of monarch butterflies other migrating species.

Harveys Knob “traffic” is not limited to just the roadway and the sky; hikers on the Appalachian Trail cross the roadway at this location.  In 2019 a total 788 of 3,628 thru hikers were able complete the trail, (AT data says about 1 in 4 hikers complete the trail in a 12-month period).  Harveys Knob is 734.7 miles from the southern terminus at Springer Mountain, Georgia and 1,443.6 miles from the northern end point at Mt. Katahdin in Maine.  Accessibility makes this a popular spot for local hikers. If you hike up to the top of Sharp Top Mountain there is an observation area with metal markers pointing to other landmarks; there is one for Harveys Knob 7 miles away.

The posted elevation at the overlook is 2,524 feet and the location is typically called milepost 95.5 (milepost are only at full mile locations).  It is approximately 10 miles from Parkway’s intersection with Route 460.  GPS location is 37.45 north, 79.72 west.   Who is Harvey and why did they name a knob after him?  Robert Harvey (b 1756 – d 1831) fought in the Indian Wars and served as colonel during the Revolutionary War and started an iron furnace (later Cloverdale Furnace) on Back Creek in Botetourt County.  Built a home (mansion) Hawthorne Hall north of Fincastle and started other iron furnaces and ironworks.  Died and buried at Martha’s Furnace in 1831.  There is no apostrophe in Harveys Knob.

1 thought on “The BRR Logo Story”