Welcome to Gary Roach who lives in Roanoke, Virginia.

Dick Hatch has moved to a new location. He is at assisted living memory care center.

I visited with him last week. Nothing wrong with his memory. Nor with Caryl’s. We had a nice chat about the old picture books that Caryl painstakingly put together in the early days of the club. Take a look at our Blast from the Past section to see some of the old days of the club.

Kenny Wingfield had an accident on his Harley this weekend and ended up with seven broken ribs and a punctured lung.  He is in Roanoke Memorial Hospital (don’t have a room number).  A friend of his said he would appreciate hearing from his Porsche Club colleagues.  His mobile number is 540.815.0531.

I need help. Got a story? Or an idea for one? Send a note to blogger@brr-pca.org.

Are you a fan of Ruf cars? Take a look at these pictures from the Petersen Museum.

This was a great overnight event, one of the first I attended when I moved down to this region. We had a great time. But not quite as rowdy as Rub a Dub!

Blast from the Past

Click on the picture below for more about the 3 men in the tub!

We received a note from Sharon Stanley about our list of Charter Members. Click on the image below for this interesting story. 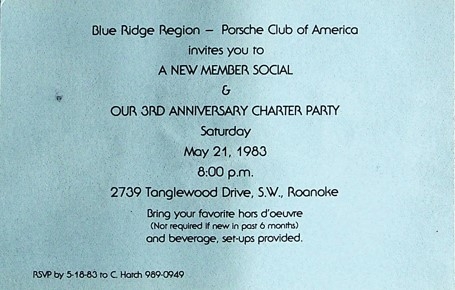 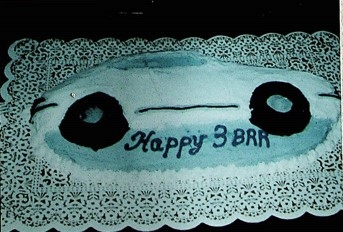 What happened this week in Formula One?

Verstappen is leading in the points, ahead of Hamilton. You remember last race, where Hamilton driving for Mercedes, took out Verstappen, and went on to win the race.

Well, another exciting race, this week in Hungary. On a wet start, Bottas, who also drives for Mercedes, starting second and getting off to a poor start, managed to take out both Red Bull cars, Verstappen and Perez. In the restart after a Red Flag, the cars lined up single file with Hamilton in front. Interesting, there is no radio communications during starts and restarts. All the cars had wet tires mounted. Then the sun came out and dried the track. Hamilton took off. The second car went into the pits for a tire change and was followed by the entire field! Hamilton came around and had to pit for his tires and went from 1st to last place! As the race progressed, Hamilton worked his way back to a 3rd place finish. Verstappen was able to drive his patched up car for a 10th place finish. The teams are on summer break, the halfway point in the season. Hamilton now leads Verstappen by a few points. Should be an exciting second half.